“I’m at a desperate point,” said one resident in Southwest.

Starting Thursday, there will be 50 more trash cans on routinely litter-strewn Philadelphia streets.

As part of its Community Cans program, the city is providing the coveted items to blocks in Southwest Philly and Juniata Park. The catch? The neighborhoods will have to empty the rubbish themselves — and then put the bags out with their regular garbage collection.

Getting neighborhoods to agree to do their own maintenance was key to selecting them, Nic Esposito, director of the Zero Waste and Litter Cabinet, told Billy Penn. After Philly’s Office of Innovation and Technology helped the Streets Department highlight areas with bad Litter Index Scores, they narrowed things down to places where people were willing to put in the work.

“The trash is to be managed by the community sponsor and their community partners,” Esposito said. “The city does not empty.”

Southwest Philly’s Woodland Avenue, a busy corridor with a dismal Litter Index of 2.46/4, will have 30 new trash cans installed. In Juniata, the 2.57-rated Cayuga Street will get 20 wire waste baskets.

The new receptacles will be placed on sidewalks, not bolted in place. They can be chained down if the community wants to make the effort, per a spokesperson, who said a key must be provided to the city.

The only large U.S. metropolis without a citywide street sweeping program, Philadelphia is trying out various pilot programs to combat its pervasive litter problem. Over the past year, the city has started a private trash can program in North Philly and a dusty street sweeping operation in seven corridors around town.

This new program is a low-cost addition to the efforts. The cans were paid for via a $30,000 Environmental Protection Agency grant, and will be emptied by volunteers and businesses, who signed a contract promising they’d do it in a timely manner.

The program has already been rolled out in East Kensington, Fairmount and Francisville, a city spokesperson confirmed. 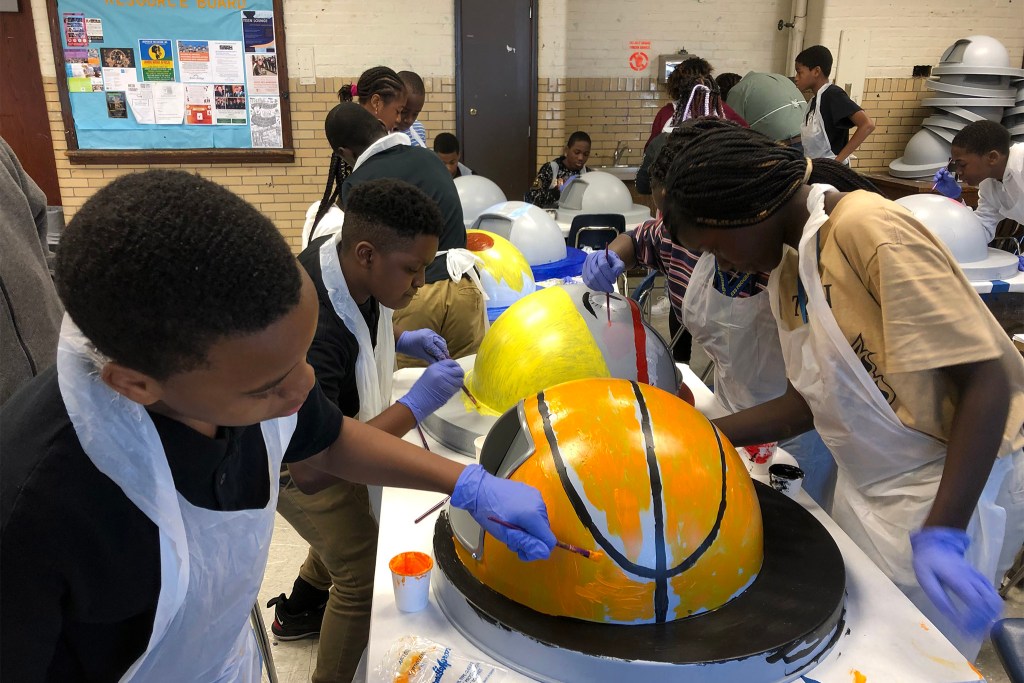 To Southwest Philly block captain Luzenia Lovett, the volunteer aspect of the project is a little frustrating. But she’s not going to knock any program that seeks to improve the city’s trash problem.

“I’m at a desperate point,” Lovett told Billy Penn. “At this point I’d be willing to empty them myself, because I feel that strongly about this trash situation. That’s how badly I want something done about it.”

Plus, these cans have a little Philly flare.

Each set of receptacles was hand-painted by local artists and neighborhood volunteers. In the North Philly neighborhood, kids at Ferko Playground had a hand in designing the lids. In Southwest, it was Tilden Elementary School children.

Lovett is glad to see some positive momentum on the litter front. She said she’s been asking various city agencies for trash cans in her neighborhood for years.

Woodland Avenue already scores the city’s street sweeping pilot, plus the regular Southwest CDC cleaning program. But less busy streets surrounding the corridor — like Lovett’s 2100 block of South 60th Street — are often left out of programming like this.

“Not a day that goes by that I don’t have trash blowing and piling up at the front of my door,” Lovett said. “I’m out sweeping daily.”