The HIV/AIDS epidemic was in its infancy when Dr. Kamel Khalili started researching the disease. It was 1983 — an early year of a disease that would go on to kill 700,000 Americans — and he was tasked with finding a cure.

“It was extremely depressing because we were hearing and seeing patients dying with a disease which we didn’t know at the beginning what caused it,” Khalili told Billy Penn.

Now, the Temple researcher has taken a major step toward his 36-year-old goal. Khalili announced last week that he successfully eliminated HIV from the genetic code of infected mice. And he couldn’t have done it without the help of third-generation Philly native Dr. Howard Gendelman, who now works as the chair of the neuroscience department at the University of Nebraska Medical Center.

It’s possible that, in the years to come, the duo will be able to use the same technology to cure the disease in humans.

“Always for us, this was a dream,” Khalili said. “We thought it was impossible.”

Like nearly every important American milestone, this achievement is a true Philadelphia story, one that has all the important elements: tragedy, innovation, collaboration and a lifelong brotherhood between an immigrant to Philly and a native of the city.

Gendelman and Khalili met as postdoctoral fellows at the National Institutes of Health. They were in their 30s, working on a molecular biology team that studied the persistent virus.

Gendelman grew up at Cottman and Castor avenues, and worked his first job as an ice cream truck driver in Fishtown. Khalili hailed from farther away — he was born and raised in Tehran, Iran, and moved to the U.S. to get his Ph.D. at Penn.

At first, the two didn’t quite get along.

“He’s an Iranian and I’m an aggressive Jew from Northeast Philly,” Gendelman joked. “We had kind of a difference of opinion. We were hot and cold.”

Still, the two were united by their passion to cure a mysterious virus that was beginning to overtake the country. It was unlike anything they had seen before. By 1984, nearly 4,000 Americans had died of the disease.

Gendelman was on a team that treated some of the first-ever HIV/AIDS patients. He was immensely frustrated they couldn’t figure out how to stop the constant deaths.

“People were dying right and left and we had no idea what was going on,”  Gendelman said. “They would hold your hand and say, ‘help me, help me,’ because usually that’s what doctors do, they make you better. In this case, we just made them comfortable.”

The mass desperation ignited a passion in both Khalili and Gendelman — to which both researchers have devoted their entire careers. 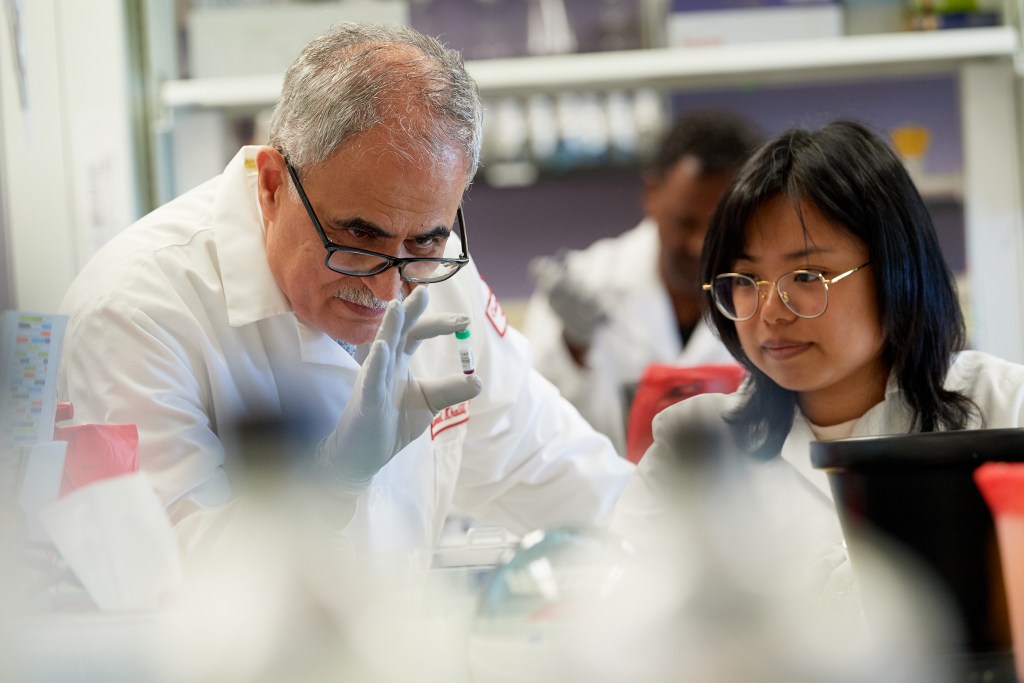 Gendelman’s accent is still highly present — even speaking over the phone from Nebraska. And Khalili’s been working in the city his entire life, at just about every hospital in the region: Penn, Jefferson, Hahnemann and now Temple.

“I’m a true Philadelphian,” Khalili said. “I had many options to go to many other places in the country, but I love Philadelphia.”

In their research, the two worked on opposite sides of the coin — Gendelman on something called LASER ART, which stops the virus from spreading, and Khalili on CRISPR, which eliminates the virus from the cells where it’s already spread.

Conducting research more than 1,000 miles apart, the two realized each of their technologies couldn’t work alone.

“LASER ART was able to keep count of the virus low, and CRISPR was able to eliminate it,” Khalili said. “When we combined these two methods together, we realized they showed signs of no virus present.”

Together, their methodologies managed to effectively erase HIV from a third of the infected mice they studied — and between the researchers, it forged a permanent bond.

“People joke about Philly being the city of brotherly love,” Gendelman said. “Well we are brothers. We became very close since this research started.”

Khalili even visits Gendelman’s mother every now and again, who’s in her 90s and still lives in Philly.

So how close are we to an HIV cure?

If all goes well, we’ve got at least a few years before this technique is rolled out for humans. Next up, the researchers will test the effectiveness of their methodology on monkeys. If that’s just as successful as the mice, then they’ll need approval from the FDA to test on humans.

And if that works, they’ll need a pharmacy company to sign on and take it to the next level.

But the Philly duo is optimistic.

“We have a pathway to cure HIV, which is pretty cool,” Gendelman said. “We’re not there yet, but we have a way to go.”

How Does a Final Expense Insurance Plan Work?