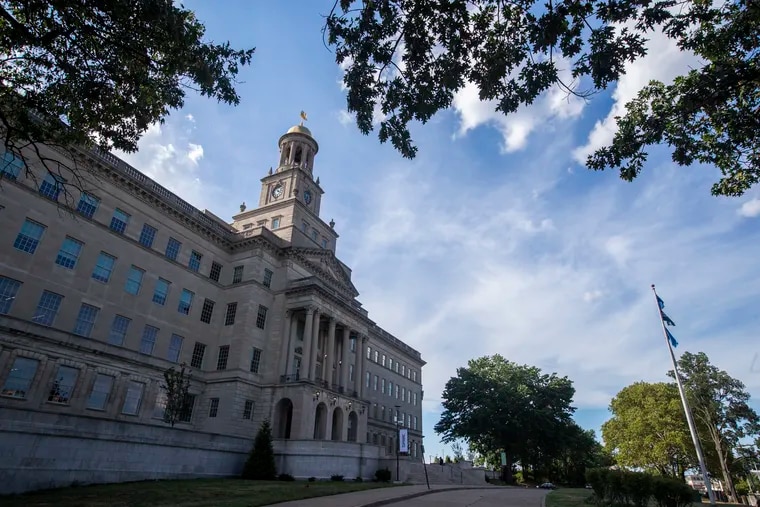 Just north of Market Street and its elevated train line is a stretch of West Philadelphia dominated by urban planning from a different time.

This stretch of land is defined by huge institutional buildings set on expansive grounds disconnected from the rest of the city. Ranging from the former Provident Mutual Insurance Co. headquarters at 4601 Market to the Philadelphia Housing Authority’s Westpark towers to the Kirkbride rehabilitation center, these structures stand alone and have the lack of street life to show for it.

But today, as housing construction surges in the parts of West Philadelphia close to University City, developers want to fill in the empty spaces. That’s why Iron Stone Real Estate Partners, the developer of 4601 Market, is planning 1,240 apartments in five seven-story buildings and one 18-story tower surrounding its newly renovated health and education campus.

“West Philadelphia is a fabulous market,” said Jason Friedland, one of Iron Stone’s five partners. “Some of the city’s biggest employment centers are in University City. People want to live near work. They want to be able to commute without driving.”

The stately historic building at 4601 Market has been the center of a lot of drama over the past decade. Under Mayor Michael Nutter, the city planned to move the police headquarters there and spent $52 million on renovations. Mayor Jim Kenney killed that plan and moved the police to the old Inquirer building on 400 N. Broad St. instead. The city then put 4601 Market up to bid, and Iron Stone won and purchased it for $10 million in 2019.

The developer has turned the building into a health and education campus, where the Philadelphia Health Management Corp. (PHMC) will operate a health center and offices out of the ground, first, and second floors. Children’s Hospital of Philadelphia (CHOP) uses the third floor for a behavioral health center, and a KIPP charter school for kindergarten through fourth graders is on the fourth floor.

That phase of the building is almost finished. CHOP and KIPP have both moved in, and students had their first day of class on Thursday. On PHMC’s floors and on the fifth floor, where amenities like a cafeteria, a gym, and conference rooms await, construction workers are putting on the finishing touches.

Now Iron Stone is almost ready to move on to the next phase of its plan.

Iron Stone partners declined to share maps or renderings for their proposed residential buildings because they have not reached out to community organizations yet.

But they described two towers totaling 400 units on raised podiums to allow parking underneath to the north of the historic building, next to Haverford Avenue. Four other buildings, including the 18-story tower, would be at the intersection of 48th and Market Streets and host retail on their ground floors to activate the streetscape.

As with many other new apartment developments, the size of the units would range from studios to one- and two-bedroom apartments.

Iron Stone’s plans would be the largest housing development that this area of West Philadelphia has seen in the last hundred years. According to the University City District, the area bounded by 40th, Walnut, Haverford, and 48th — which includes a lot of underused land — had only seen 559 new units built from 2003 to the end of last year. But between this year and 2026, not including the Iron Stone proposal, 1,820 new units are planned.

Iron Stone partners said they were not worried about an apartment glut in the area, especially in the context of a national housing crisis exacerbated by smaller household sizes.

“My understanding of the housing crunch is that it will be going on for a long time, just based on demographics,” Friedland said, “and by changing desires of what people want from their housing.”

The proposed Iron Stone development would not need zoning variances, meaning that neighborhood groups, City Council, and the Zoning Board of Adjustment would not be able to exercise much influence over its final form.

In addition to being zoned CMX-3, a category that allows for mid-rise development, it also lies within a transit-oriented development area. This special zoning designation creates a 500-square-foot zone around the 46th Street SEPTA station that allows for taller and denser buildings with less mandatory parking than would otherwise be required.

Even denser building is allowed if affordable housing is included in transit-oriented developments, but Iron Stone was noncommittal about that.

Iron Stone also filed its residential permits before Councilmember Jamie Gauthier’s mixed-income housing requirement went into effect on July 18, which covers this area and would have required at least 20% of the units to be below market rate. The developer said it wanted to consult with neighborhood groups before deciding whether to include affordable housing, although they noted that PHA’s neighboring Westpark neighborhood will soon be redeveloped and expanded.

“Westpark is larger than our entire site here,” Friedland said. “If the goal in this district is to create affordable housing, that works really well with a government partner. You can achieve a lot of density there.”

Gauthier wants the developer to approach conversations with her office and the community with serious consideration for providing below market-rate housing at 4601 Market. After all, she says, working-class and lower-income people also want to be able to walk to work and live close to transit and economic opportunity.

Staff Reporter
Our News team is comprised of veteran journalists and student interns with a passion for recency and relevancy.
View All Posts