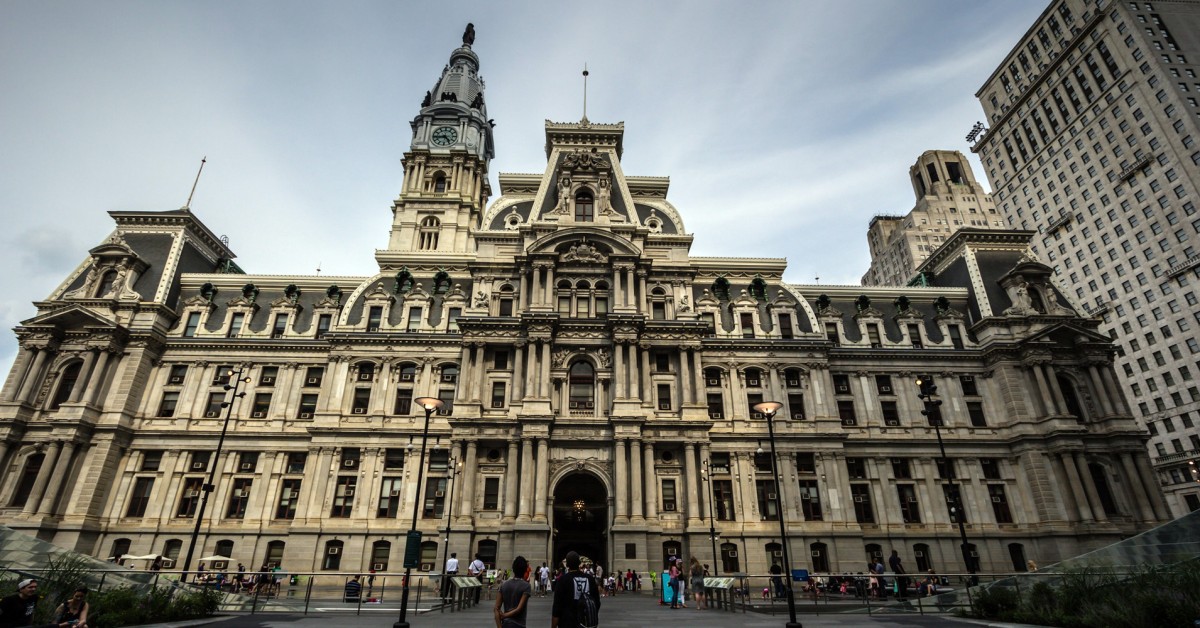 The stated mission of the proposed Philadelphia Public Financial Authority is to support Black-owned businesses and other businesses in neighborhoods that have historically lacked access to credit.

After coming into office in 2016, the first bill Philadelphia City Council Member Derek Green passed was a resolution to initiate hearings on establishing a “public bank” in Philadelphia.

That resolution took as a model the state-owned Bank of North Dakota, established in 1919 and still a thriving, profitable institution with $10 billion in assets today. By law, all of the state government’s deposits are held at the Bank of North Dakota. With that as its deposit base, the bank partners with private banks and credit unions all over the state to finance economic development, making loans to support everything from huge infrastructure projects to small local businesses like F-M International Foods, an immigrant-owned grocery store in Fargo.

In order to avoid competing with the private sector, the state-owned bank primarily uses what’s known as “loan participations” — private lenders originate the loans, but behind the scenes the Bank of North Dakota agrees to supply a share of the borrowed amount in exchange for a share of the interest paid on the loan. Loan participations are a way for banks to manage risk and do more loans or larger loans than they otherwise might by themselves. In a typical year, the Bank of North Dakota says it makes around 800 business and agriculture loans in partnership with private lenders across the state. In 2020, it made more than three times that amount: 2,500 loans as well as emergency grant distributions.

Green envisioned a city-owned bank in Philadelphia holding municipal deposits and operating in much the same way. Like the Bank of North Dakota, the new Philly institution would partner with existing private lenders including community development financial institutions, United Bank (Philly’s only Black-owned bank), and other investment funds to expand their work using loan participations, or loan guarantees or other partnership models.

As a former small business banker himself, Green came to believe in this public bank model as an idea that could increase access to credit for Black businesses in a city that is 45% Black but only 2.5% of businesses with employees are Black-owned. As an experienced policy staffer in city government, he knew it would be a heavy lift — possibly too heavy. The politics and the practicalities of the public sector owning a depository institution are fraught, to say the least. How would the city-owned bank’s lending decisions be made, and what would happen if the institution loses money or fails?

All that said, Green is getting close to his first big victory on this front. Today, Philadelphia City Council is discussing a bill that establishes the Philadelphia Public Financial Authority. The final vote on the bill is currently scheduled for March 3. There would still be a few more big steps after passage of the vote before the authority could hold municipal deposits, if indeed they eventually meet the requirements to take deposits. But this would make Philly the first municipality to establish a city-owned entity with the expressed intent of doing so.

What the bill does

During the numerous in-person and virtual events on public banking that Council Member Green and others have hosted since initiating these discussions in 2016, the topics brought up most frequently have been: how the potential city-owned bank would be governed, and how it would avoid corruption or misguided lending that might be driven by mere politics instead of real financial viability.

Here’s what those conversations yielded. The bill at hand proposes to establish an entity with at least three levels of decision-making. In this, Philadelphia’s public bank model would be far more sophisticated than the model adopted by the Bank of North Dakota; its board consists of only three elected officials — the governor, the state agriculture commissioner, and the state attorney general. Those three alone oversee the Bank of North Dakota’s staff of professional bankers, who are led by the bank’s CEO.

At the top of the Philadelphia Public Financial Authority’s decision-making hierarchy is its Board of Directors. The board would have nine members, all recommended by City Council but appointed by the Mayor. Members would serve six-year terms, but staggered so that new board members cycle in and out every two years.

The bill does not grant the board of directors the power to approve individual loans or even the power to establish lending and investment policies. Instead, the board of directors has the power to appoint a nine-member “Policy Board,” members of which must include representatives from the worlds of community development, banking or finance, and various substantive areas including environmental justice, racial justice, public economic education and health, co-operative development, neighborhood-based small business development, gender justice, or public transportation.

The Policy Board seats will also come with staggered six-year terms. No one can serve simultaneously on both the board of directors and the policy board.

It’s the Policy Board that has the power to set the Philadelphia Public Financial Authority’s lending and investment policies and criteria. It also has the power to appoint the authority’s executive director, with the “advice and consent” of the board of directors.

And if the Philadelphia Public Financial Authority is to continue taking pages from the Bank of North Dakota model, then the primary drivers of the authority’s business will be its staff, consisting of experienced banking and finance professionals led by the executive director. They’ll be the ones sourcing potential loans (in partnership with private lenders) across the city. Much like the way a private community bank operates, staff may have some power to approve smaller loans at their level, as long as those loans meet the lending and investment criteria set by the policy board. Larger loans may require full policy board approval. The exact threshold for board approval varies and is often determined by the current overall size of the bank. But it’s important for any bank’s efficiency to have at least some approval power at the staff level, for example to allow for higher volumes of smaller transactions.

What the bill doesn’t do

In terms of holding municipal deposits, the passing of this bill would still leave the Philadelphia Public Financial Authority several steps away from that. The bill also doesn’t require the municipal government to deposit all of its funds into the bank, even after the bank reaches the point that it can hold them. What it does, for the moment, is authorize the new entity to hold municipal deposits so long as it eventually meets the same criteria for holding municipal deposits as any other bank — including carrying federal deposit insurance as well as meeting any collateralization requirements that apply to those other banks.

In Pennsylvania, every dollar of government funds must correspond to a dollar in collateral, and some cities require more than that, though Philadelphia is not one of them..

States across the country have collateralization requirements for government deposits because federal deposit insurance doesn’t cover more than $250,000 per depositor per bank, and state and local governments typically need to keep far more than $250,000 deposited at any given moment. Collateralization provides states and local governments assurance that in case the bank holding their deposits fails, they’ll still be able to recover their cash.

The rationale for deposit insurance is that it gives depositors assurance that their deposits are always safe, so they have no reason to go en masse to withdraw all their deposits at once because they fear their bank is about to fail — known as a “bank run.” Before federal deposit insurance, bank runs were an all too common occurrence across the country. But the North Dakota state government by its own law must deposit its funds in the Bank of North Dakota, so the bank doesn’t have to worry about a bank run. This would be hard to replicate for other states or cities — although growing numbers of states and cities are now exploring the possibility of starting public banks.

In Philadelphia, for now, the collateralization requirements are what they are, and the requirement remains for Philadelphia Public Financial Authority to seek federal deposit insurance before it can hold municipal deposits.

So far, the FDIC has not expressed willingness to insure deposits at government-owned banks. There is but one other example, the Territorial Bank of American Samoa. That bank does not hold government deposits but it is owned by the territorial government, which established the territory-owned bank after all other banks abandoned the island chain in 2012. The bank has established a different model for protecting its deposits for now. But according to one local report from January 2020, FDIC officials did tell officials at the American Samoa bank that if more states began lobbying the agency, things could change.

The Philadelphia Public Financial Authority would also need to seek a banking charter, which can come from the state or the federal government. Most states coordinate their bank chartering process to work similarly or in conjunction with the FDIC process.

What are the next steps?

The bill also does not specifically allocate funding for the startup costs of the Philadelphia Public Financial Authority. Besides the staffing and other administrative costs, starting a bank requires an up-front investment of startup capital, also known as equity. Private banks get it from their founders or shareholders. The bill authorizes the entity to generate startup capital by issuing bonds and raising funds from local, state and federal government sources, in addition to private philanthropic donations.

It is not easy to start up a financial institution, and starting one that holds deposits is even more challenging because of the regulatory process. Overlay a mission orientation on the institution and it gets even more difficult, given for example a focus on smaller loans that would not provide as quick a path to profitability that larger deals would. There’s no guarantee that the public bank will become profitable, but at least there are established ways to protect the city from losing its deposits in case the institution fails.

Until the bank can hold deposits, it would also need enough startup capital to start making loans if it wanted to do so before satisfying all the requirements to hold municipal deposits.

Not very long ago in Virginia, that commonwealth established a new nonprofit entity with just $15 million in assets from the state government and a specific mission to support affordable housing and community development. Known as Virginia Community Capital, that nonprofit went out and, in less than two years, obtained federal deposit insurance and became a full-fledged, federally chartered and regulated bank. It now has $228 million in assets and $173 million in deposits from other banks, corporations and various other institutions — including a few state and local government entities in Virginia. It’s not technically a public bank, though its board of directors does currently include both public sector and private sector members.

So in other words, this kind of thing that Philadelphia is doing, while unprecedented in some ways, has precedents or examples to draw upon in other ways.

Last updated on September 14, 2022
Staff Reporter
Our News team is comprised of veteran journalists and student interns with a passion for recency and relevancy.
View All Posts

Flood insurance costs decrease for many in Philly