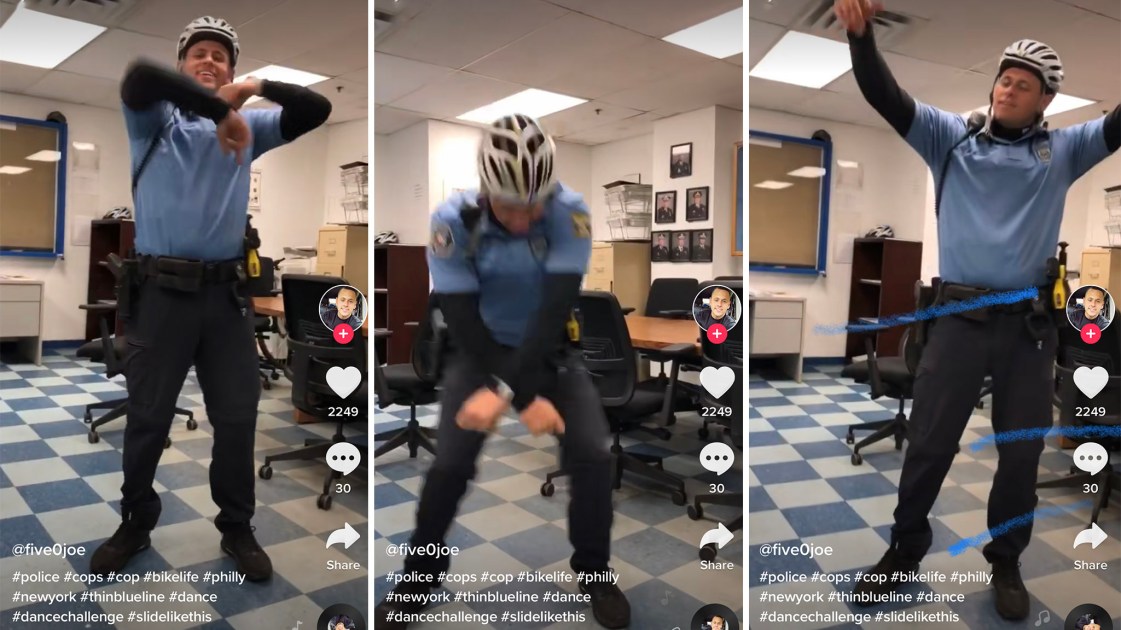 The track drops into the first verse, and Guttierez’s camera swings to a group of girls on a Philly playground who erupt into dance. They hit the moves in step with the trappy bass and Lil Nas’s country-twanged bars. “I got the horses in the back, horse tack is attached, hat is matte black, got the boots that’s black to match.”

“Old Town Road” is ubiquitous — nowhere more so than on the TikTok video sharing app, which helped catapult the song from internet curio to chart-topping banger in the early days of 2019. That’s where Guttieriez posted the video last month, to his TikTok account @five0joe, where he has 122,000 “fans.”

Dancing on street corners, dropping buckets at the local rec center — Good Cop Content has been around as long as the World Wide Web itself. It’s the apps that keep changing.

TikTok has recently become home to a worldwide blue subculture. Even beat patrols like Gutierrez can attract hundreds of thousands of followers and garner massive engagement on the fast growing Chinese video-sharing platform. Some users orbit around pro-police hashtags like #ThinBlueLine or #BackTheBlue, while others, including Gutierrez, ascribe to forging stronger police-community relations.

Like its sibling apps, TikTok can present concerns for law enforcement agencies at a time when officers have come under fire for their social media habits.

This summer, the Philadelphia Police Department took center stage in a national scandal after a trove of offensive and racist Facebook posts emerged in a database called the Plain View Project. Six officers lost their badges as a result, and protests demanding accountability have continued into the fall.

TikTok doesn’t lend itself to news-sharing or posting controversial hot takes as readily as Facebook and Twitter. The app’s short, elliptical videos orbit around music and special effects. It’s more like Instagram — or better yet, the now-defunct Vine — an ideal venue for feel-good snippets that, officers like to say, shows their human side.

But policies around posting to the internet are complicated — and even TikTok can have serious consequences. In other city police departments, the app has come under fire as officers publish unapproved footage from their patrols. In the PPD, officers aren’t even supposed to post anything representing the police force “without express permission from the Police Commissioner,” according to the department’s social media policy.

The PPD doesn’t have an official TikTok account (yet), but in recent years, the department has gained accolades for its social media use — from “no savesies” memes to everyday crime prevention tips. The department’s Twitter and Facebook pages have enabled it to tell positive stories about its officers, which means the PPD basically now handles its own “good press,” Inquirer columnist Helen Ubiñas noted in 2017. Side effect: the department now routinely denies local reporters access to officers to share their stories.

Perhaps unsurprisingly, the department declined to make Guttieriez available for an interview, and the officer didn’t respond to an email request for comment.

The use of social media — even for professed positive purposes — raises a unique question for the department, says Hans Menos, director of the city’s Police Advisory Commission, a citizen oversight group.

Menos feels digital spaces should be considered as important as real spaces for fostering goodwill. Despite his commission’s criticism of the department over the Facebook scandal, he believes officers should be allowed to present their own positive narratives, on TikTok or elsewhere.

“I think the officers should be encouraged to use social media to build public trust,” Menos told Billy Penn. “If their social media use is toward that goal, I don’t have a real problem with that — but that’s not to say the department won’t.”

PPD spokesperson Capt. Sekou Kinebrew said he wasn’t aware of any complaints — or commendations — over officers for their TikTok accounts, though he acknowledged they could exist.

“An exhaustive search for complaints or commendations specifically relating to the use of ‘Tik Tok’ would be extremely (and almost prohibitively) labor-intensive,” Kinebrew wrote in an email.

Kinebrew said the department still does not “continuously monitor” the social media posts of its officers. However, in the last few months, he said, the PPD has been “evaluating types of ‘data mining’ software that will help detect offensive language based on membership in protected classes.”

TikTok presents something of a supervision problem on that front. It’s a video app, where text is secondhand. Content is found most easily hashtag, such as #police — which shows dozens of officers from around the country posting videos from their patrol cars.

Like everyone else, officers can use social media to project a curated version of their lives — or in this case, their jobs. Back in Philadelphia, Gutierrez makes public posts of him and fellow officers in uniform. They drink coffee. They sing along to songs.

But what is being shown always raises the question of what’s not being shown. For some officers, the online “good cop” image has been shattered overnight.

In Columbus, Ohio, police officer Anthony Johnson went viral in 2015 with a video of him entertaining neighborhood kids with his dance moves, which earned him the affectionate moniker “the dancing cop.” Johnson made the transition to TikTok, where his 350,000 fans drop <3 emojis on his videos. But his benevolent image came undone this summer after he was caught on video “sucker punching” a man in the face.

In the nine months since TikTok took off in the U.S., the video-sharing app has proved to be a shiny object that some say distracts officers.

A police officer in the U.K. garnered national headlines in the early days of the app for posting cringeworthy videos of himself singing Christmas carols and doing Spongebob Squarepants impressions while on duty — allegedly even at a crime scene, according to news reports. There was a similar controversy with a uniformed officer in India this year.

Thomas Nestel was one of the first Twitter cops. The meda-savvy SEPTA Transit Police chief started using Twitter in 2012, back when it was a younger, less crowded and — some would argue — a less toxic platform.

He developed a local rep for his own Good Guy Cop brand. He still tweets almost everyday, and maintains that without social media he’d be a less effective law enforcement leader.

“I get a lot of DMs from people who trust me because of my social media presence,” he told Billy Penn. “I get reports from wrongdoings from people who probably never would have contacted the police.”

Nestel can post as he pleases, while SEPTA’s rank-and-file officers need permission from a supervisor before posting any tweet or TikTok about work. Perhaps tellingly, he said transit officers don’t make many of those requests. Whether they’re still posting from anonymous handles, he can’t tell.

The Philly Police Department similarly does not sanction officers posting about work on their social accounts without permission.

PPD Detective Joe Murray, who started building a reputation on Twitter in 2009, eventually faced censure for going around official police communication channels. Supporters in West Philadelphia at one point petitioned the department to allow Murray to keep using the platform independently.

Nestel said the concern for law enforcement leaders is that officers given too much rein on the internet could begin crossing a line — or even sending the wrong message. Posting a photo of someone overdosing on opioids in Kensington could land the department in trouble. Leaking pictures of people in custody has also landed Philly police and others in hot water.

More common are the concerns raised by the Facebook scandal this summer.

“The use of social media for positive community contact is fantastic,” Nestel said. “What’s gotten police in trouble is venting frustration and expressing totally inappropriate things.”

Nestel used to post uncensored photos of fare evaders on SEPTA platforms, but began blurring their faces after being called out on Twitter. In recent years, he stopped posting those photos altogether as the department vowed to decriminalize the jumping of turnstiles.

The transit police chief is not on TikTok, he said — at least not yet.