How exclusive was Phish’s show at Philadelphia’s gloriously renovated Met theater Tuesday night? Even the band’s closest allies were feeling the crunch.

When the iconic Vermont rockers first put out their fall tour dates, many of the band’s famously obsessive fans noticed the itinerary contained a curious hole: Dec. 3 was missing. Rumors swirled that a show exclusively for satellite radio subscribers was coming — and since the date was between one engagement in Long Island and another in Pittsburgh, attention turned to Philly as a likely location.

In October, Phish at the Met was formally announced. Passes were doled out via sweepstakes and to random callers who lucked into being part of the second-smallest show the group has played in two decades.

The band can easily fill up a giant sports stadium, but only 3,500 people fit inside the Met. Opened in 1908 as the Philadelphia Metropolitan Opera House, the century-old auditorium was recently renovated by developer Eric Blumenthal at a price of $56 million. With a schedule managed by Live Nation, the restored venue relaunched on Dec. 3, 2018 with a concert by Bob Dylan.

Phish was the choice to mark the theater’s first birthday — and it proved a huge draw for people from across the nation.

Lauren Hoffman, a gym owner in Ann Arbor, won her pair of passes by calling in to Phish Radio during one of their surprise drops. “I’d been calling and calling and not getting through,” she said from her choice spot in the second row on the floor. “I was listening at work and called in, holding the phone with my left hand while coaching two people, and it started ringing!”

Hoffman and her husband had driven straight from Michigan to the venue, where lucky ticketholders were picking up their passes and wristbands, available only between noon and 5 p.m. Tuesday afternoon.

With absolutely no secondary market for tickets — a usual standard feature of the jam band scene — Phish at the Met had fans working overtime on every possible angle to get in. 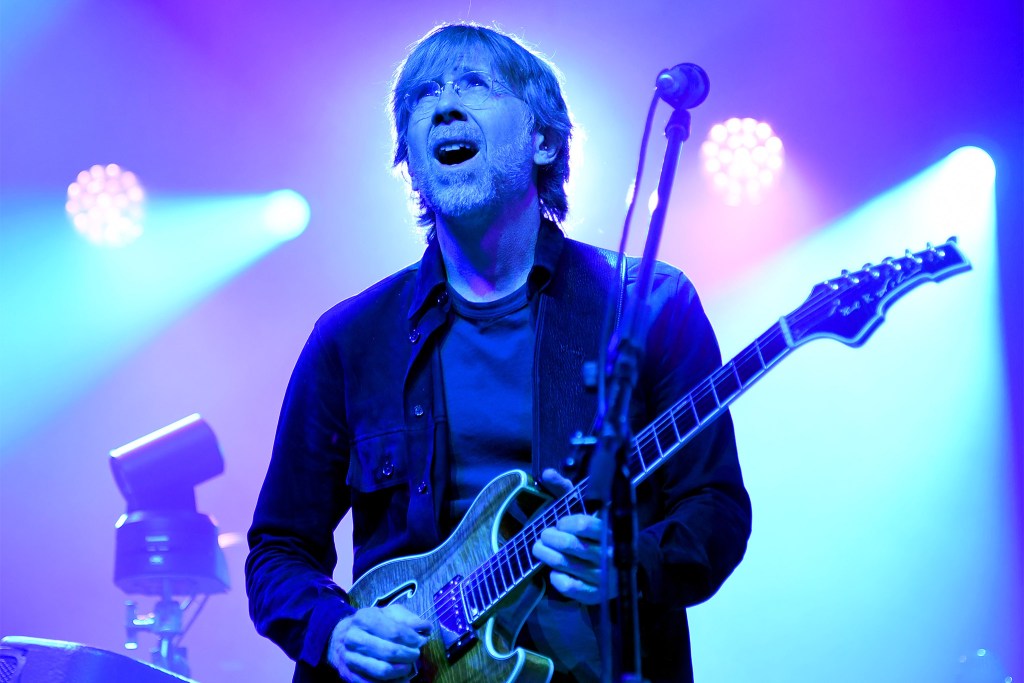 Hopeful acolytes gathered on North Broad Street were told by venue staff to start a line and create their own list for standby tickets. In the end, at least 250 were handed out, and some folks carried on the Grateful Dead and Phish tradition of “miracling” their plus-one ticket to some optimistic comrade with their finger in the air.

It wasn’t just fans figuring out how to get inside the Met on Tuesday afternoon, but the Phish crew as well.

Checking into VIP with rolling luggage in tow was Dan Kanter, musical director and guitarist for Justin Bieber. Kanter and Phish share a co-worker in lighting director Chris Kuroda, who also works the Bieber tour. Phish bassist Mike Gordon was spotted dining at Vedge on Monday night, and taking in caffeination at Elixr coffee shop in Center City before the show.

As he unloaded heavy gear cases from the belly of a bus, Kuroda cracked jokes about the glamour of rock and roll. Would the massive, transforming LED lighting rig he uses on tour even work inside such a petite space? In Kuroda’s hands, yes.

“We’re taking a stadium-size lighting rig and putting it in a 3,500-seat theater. It’s going to be bright,” he said. “I hope you brought your sunglasses.”

Lovingly called CK5 and the “fifth band member” by Phish fans, Kuroda delivered on his promise with an eye-popping show of rainbow lasers that skimmed the crowd. 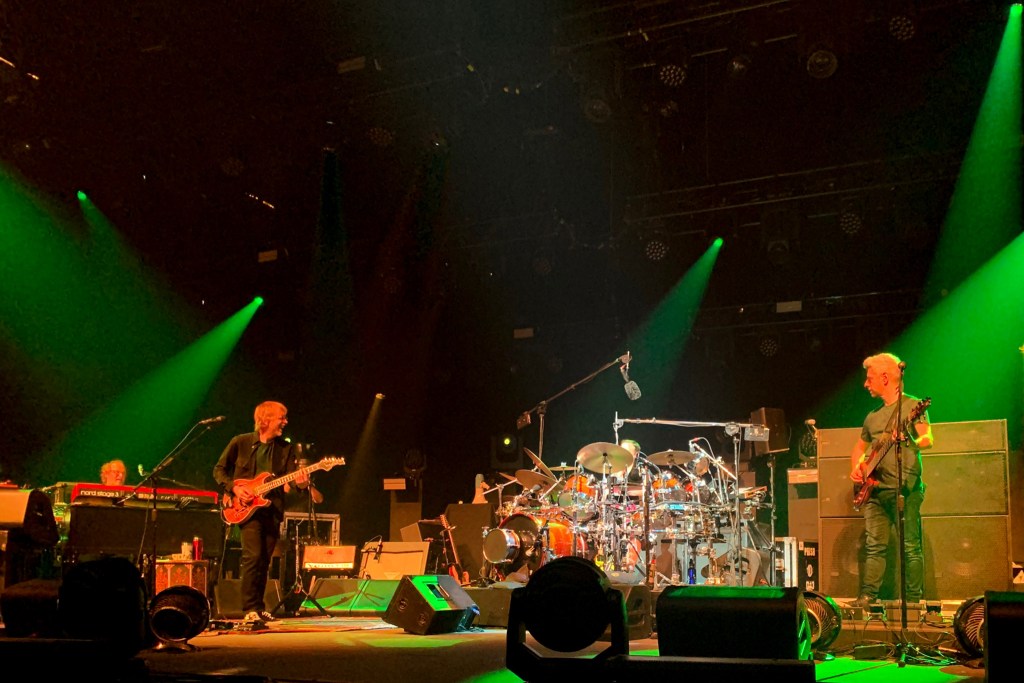 When the lights went down inside the Met at 8 p.m., the band stepped to a single mic for the acapella barbershop classic Hello My Baby before returning to their instruments for a rollicking Tweezer. The signature Tweezer riff would weave in and out throughout other songs in the two set show, with the capacity crowd greeting each reprise with a roar of delight.

Moving deftly between barbershop harmony to a heavy headbanger is very Phish, who may be broadly classed as a “jam band” but play songs from nearly every genre.

The Met show was heavy on classics, with a soaring Free and funky Moma Dance in the first set, and improv vehicles Chalk Dust Torture and Twist in the second.

Dirty blues were delivered with a skulking cover of ZZ Top’s Jesus Left Chicago, a song long missing from the rotation and the first of several high-energy covers of the night. A highlight of the second set was the bass-driven Mike’s Groove, a sandwich of Mike’s Song and Weekapaug Groove with an alternating filling.
The Met got a bite of Sparkle into drummer Jon Fishman’s totally ridiculous Ass Handed, quickly dubbed Sparkle Ass Groove by one attendee.

Making its first appearance on a fall tour set list, the Beatles’ A Day in the Life rang through the theater, with seemingly every person in the audience singing along joyfully with the band.

Segueing out of the Beatles and into Deodato’s funk arrangement of Strauss’ Also Sprach Zarathustra sent the audience into a frenzy of wild dancing as the familiar peak built and crested. Transitioning from disco funk into what can only be described as house music, Phish laid down a techno groove that was the most revelatory moment of the night. 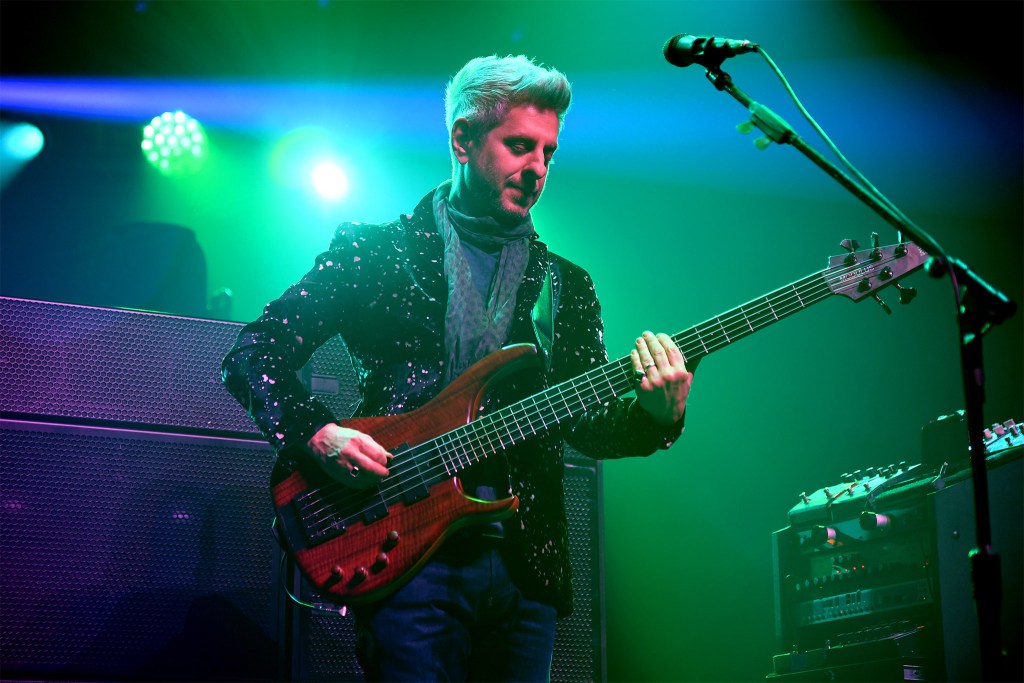 It was as evident as ever that thirty six years later, Anastasio, Fishman, Gordon and McConnell are still exploring new musical possibilities and creating a completely different show every night, live on stage.

“Come waste your time with me,” sang guitarist Trey Anastasio, in the first of two encores of the night. Judging by the crowd’s response to the huge and rocking Tweezer Reprise final encore, there was not one guest of Phish at the Met who would say no. Sealing the experience with an explosion of sound, movement and swirling lights, it was a dramatic and fitting end to a night at the opera.

In a nod to Sirius XM’s simulcast of the show, Donna Summer’s On the Radio played as fans walked blissfully out into the Philadelphia night.