On the top floor of Philadelphia’s new downtown mall is a storefront that doesn’t quite fit. It looks sort of like the Fashion District has set up a modern-style cafe for folks that make the trip — there’s a coffee counter — but it also gives off the vibe of a clothing boutique.

Next to a deep crimson wall leading to racks of street-style threads, a sign announces the shop with a bold declaration: “A Place for Creators.”

The slogan caught the eye of three passersby. As local entrepreneurs Anthony Long, Lamar Glenn and Khalif Chestnut gave the set-up a once over, you could almost see a thought bubble forming over their heads: What is this?

The answer: REC Philly, a buzzing haven for artistic Philadelphians.

Behind the eye-catching entryway are 14 studios for audio and video work, rooms outfitted for photography and dance, a workspace for visual artists, a practice spot for live musicians that doubles as an intimate event space, a Live Nation stage, a 250-person venue and an open-concept area.

“If it’s co-anything, it’s co-creating,” said Silver, 28. He had just sold a cup of coffee from behind the first-ever coffeeshop extension for REC, which he started with Will Toms from a Temple basement back in 2012. (The duo won a Billies award last year.)

“Coworking makes money off of being landlord and charging rent for space,” Silver explained, “where we’re on the gym membership model — our members come for their session and leave.”

It might not be easy to understand at first sight, but folks running the space are eager to explain. The trio who were curious as they walked by didn’t stay confused for long

“I’m taking a tour,” said Chestnut, who is founder of Philly-based marketing firm Addacity. After getting engaged in conversation with a REC employee, he shouted back to invite his colleagues along. With that, they were off to see the sprawling space. By the end of their visit, the gears in their heads were turning.

“I’m really excited to see a place like this because it’s a very unique opportunity,” Long told Billy Penn. “A creative environment where youth could go.” 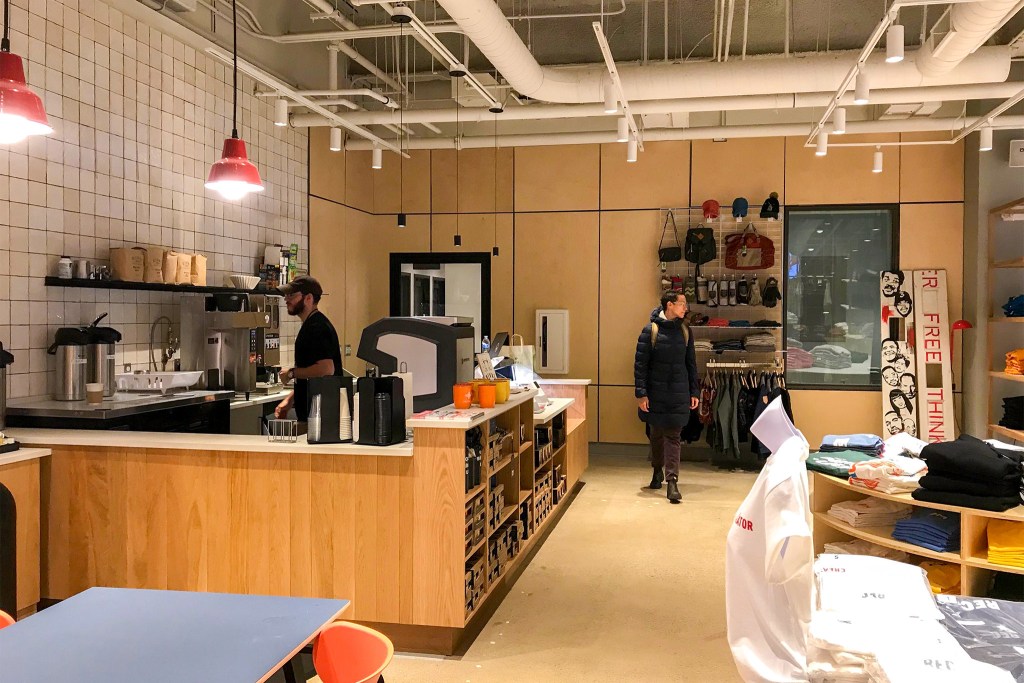 Creativity is at the core of REC Philly’s maker community, but membership runs the gamut from the financial sector to tech to web design to rap to dance.

The company started almost organically when Silver and Toms began finding stages and creating platforms for musician friends to showcase themselves — and now it’s a 10,000 square feet facility in the former Gallery at 8th and Market.

Is it weird for an arts-centered “co-creating” space to be in a mall? Maybe, Silver admitted. But he said it’s already proved advantageous.

For one, there are lots of people passing by. Silver said he talks to about 20 intrigued mall-goers a day — many of whom become interested in joining. “People need a space, need a community,” he said. “Having an affordable place for people to work, for us to be able to find that accessibility and affordability is kind of really why we exist.”

REC Philly offers memberships ranging from $50 to $150 per month, or $500 to $1,500 a year. Each tier comes with 8 to 26 credits, and access to studio and conference room space costs between one to four credits an hour. Even at the $50 level, members have unlimited access to the shared workspace and creative like cameras and microphones.

For OG member Daniel “Big Dan” Matthews Jr., the cost pays for itself.

“The investment is…about $1.70 a day,” said Big Dan said. He joined REC Philly about three years ago when they were located on the fourth floor of the window factory building at 9th and Dauphin streets in North Philly. Back then, he was dedicated but “broke,” he said. He earned his membership by exchanging services like painting.

The 30-year-old now runs a real estate business and owns an event curation and underground artist consultation company called World Famous. The elevator pitch he spits rapidfire when selling his brand? Big Dan learned how to craft it at a REC Philly workshop.

“You get access to an exclusive network with exclusive knowledge with exclusive people to get exclusive results,” he gushed about his $50 a month deal. “That comes free with the membership.”

REC Philly can charge less for memberships than other coworking spaces because it doesn’t operate on the traditional coworking business model of reserving a specific desk or office space, Silver explained.

At the Yard, for example, where Addacity has its offices, the lowest membership tier starts at $350 a month. Also nearby, WeWork’s 11th and Ludlow location starts its monthly membership at $400 for an open workspace plan. The cheapest monthly membership at 1776, a coworking space with outposts around Philadelphia, is $199. 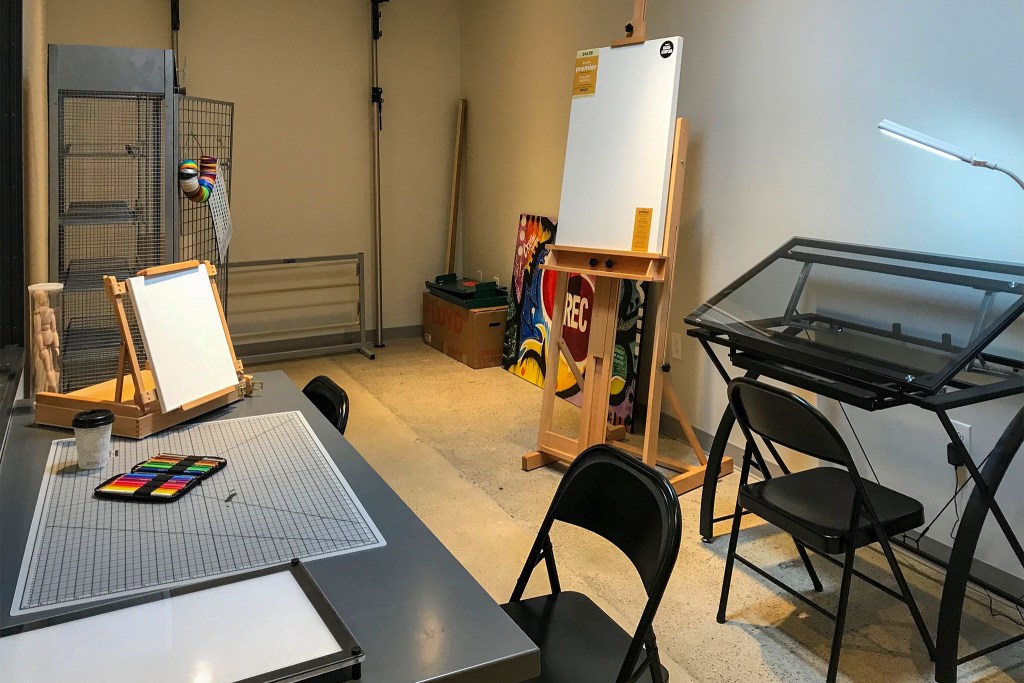 The folks who use REC are a diverse bunch. Here’s a look at a few of the members who were hanging out in the shared workspace at noon on a December Wednesday.

Morgan co-owns a web development and software company with a few friends from college, working remotely. He found out about REC Philly on Instagram and sees his membership as an opportunity to spend office time around other people while growing his creative side hustle as a web designer for burgeoning artists.

A singer-songwriter mother from North Philadelphia, Smith is also a businesswoman in the sales and finance sector. As a musician, she uses REC for its music spaces. As a finance professional, she uses the conference rooms to host meetings with her team.

She’s one of REC’s new members, drawn to the space after seeing it in the mall. “I came in the Fashion District because it’s the old Gallery,” Lashia said. “I was like, ‘Wait a minute. REC Philly? I have heard of that before.’”

She continued: “The possibilities are endless with this space, so it’s not like you have to lock yourself into doing one thing here.”

“I come from outside of this,” said Whisenhunt of the creative space. He works full-time as the director of media for a nonprofit, he said, but is also starting his own business.

He tried working from home, then working at a coffee shop where he was “spending $3 to $5 a day to get a drink to do my work.” Now, Whisenhunt spends less than $2 a day (and gets free coffee) to access REC’s open workspace and other amenities.

Being around independently employed individuals also opens up the chance for career relationships, he said. “There’s a community here and it kind of fosters collaboration.”

Pinter-Petrillo, a nutritionist and personal chef, just moved to Philly from the West Coast. She was drawn to REC Philly because of the affordability, but quickly learned her involvement on the creative side of things could prove beneficial.

During REC’s new members orientation, people are asked to craft an artist statement, which “forces you to really define what you do,” she said. Michelle connected with a vegan chef in that orientation class and met a YouTuber. “That’s definitely opened my mind to things I can add to my business.”

The North Philly native wants to be an all-around entertainer, and focuses on rap, motivational speaking and comedy. He also has an internship at a major urban radio station in the city — which REC helped him land, he said.

Originally, he’d gone there to pitch himself and his music. “They seemed so uninterested in my whole spiel and everything,” DeVille remembered. “When REC came up, their eyes just lit up.”

Covering the Costs of Assisted Living When Medicare Won’t